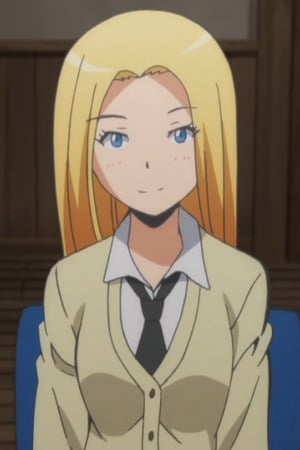 New students started joining class 3-E, but there was one boy with red hair that caught her attention. He was good in everything he did - except for his attitude, the very reason which got him transferred.

Maybe it was Karma's fault for always teasing her, but soon she began to grow feelings for the boy, something that he was clever enough to know about.

Teasing all the time did put a strain on her self confidence. She was gradually giving up on him. But someone came through in the middle of this - a rival turned into a friend and a distraction.

A person who was as good as Karma. She wasn't capable of being an assassin - she lacked the knowledge as well as physical strength.

Just thought of doing something similar to TheSteinsGateFormula since they made an amazing fic, but the damn anime isn't as good as the manga, so I'm gonna try a manga version.

Of course it probably won't be any good, just doing this for comedy purpose. Basically, Itona and Ritsu come from the Future to change the past, a mistake at the end of class 3-E's journey that caused the Earth to lose all civilisation.

They came to show them their journey for them to save the Future. The whole ends up joining them to save the world. How will everyone react upon learning of their future heroes' personal lives?

Ritsu travels twenty years into the past to try to undo the apocalypse, but due to an unforeseen error, the whole of the third year of Kunugigaoka Junior High School has been brought along for the ride and are now trapped in a time-bubble for three days When your mind won't leave you alone so you give in and write even more content for the story.

Why the heck not. This an alternative ending to Snake's Nest. If you're interested in this, I would say that you can read it on its own, but it'll be confusing as heck for you.

Still, it's up to you. If you want to read what comes before this, check out Snake's Nest up to Chap. Karma, the soon to be king of an entire kingdom is sent a letter by the Blue Rose, a renowned assassin who aims to take his life.

In an attempt to take his life, the assassin is captured which asks more questions. With Karma's birthday coming up, something is sure to happen.

Nagisa feels his legs trembling as he stands with the Beauxbatons school champion, a blond girl who stands a few inches taller than him.

Yeah, he signed up, but he didn't actually expect to be chosen. He's so focused on his own plight that he almost doesn't hear the last name being called.

Akabane Karma. If Karma hears any of the whispers, he doesn't show it. He strides down the table, joining Nagisa by the Triwizard Cup with a smile and a wave to the audience.

Confusion hits both Karma and Nagisa as they wake up one morning in each other's bodies. They panic and try to rationalise what's going on but the siuation is just too unreal.

As they live each other's life for bit they notice their body swap isn't as simple as they thought it was. Why do they swap and how do they end it? Failing in school never really bothered Ame.

After all, she's happy with what she has now: a loving family, great friends, and a cool job. What she lacks in ambition, she makes up for with her skills.

But when the E-Class welcomes a new teacher, she learns that maybe, just maybe, there's a little more that's worth fighting for. I thought you meant my katana.

With Korosensei dead and the world saved, Midoriya, Shinsou and the rest of E-class just want to move on with their lives. At the end of Chapter , when Nagisa proposes to find a way to save Korosensei instead of assassinating him, Rio is the first to speak against it.

She cites the bond between assassin and target the the very reason why she wants to continue killing their teacher. Her disagreement eventually causes the class to split into either saving or killing Korosensei, prompting him to settle the dispute by having the two factions play a paintball match against each other.

Rio joins the red kill team and acts as second-in-command to Karma Akabane. When the strength of both sides have been cut in half, Rio heads to Ryoma's position and lie in wait until the blue team attacks to capture their flag.

She reiterates her resolve to kill Korosensei, earning Terasaka's subtle praise. When the surviving blue team attack, Rio's group raced for the flag but but were ambushed from behind by Nagisa, thus eliminating her from the battle.

She later watches Nagisa and Karma's brutal fight, which Nagisa eventually wins when Karma surrenders after being caught in a chokehold.

Despite her earlier disagreement, Rio sees how both sides fought their very best and as such decides that Nagisa's side won fair and square.

She even made up to Nagisa by playfully pinching him on the cheek. Rio makes another major appearance during Valentines' Day, conspiring with Karma to teasing Kaede about her affections for Nagisa.

The pair help Kaede build up her courage by taking her to spy on other couples throughout the mountain. Rio watched Kaede present her chocolate to Nagisa and afterwards confessed that she will not act on her own feelings for Nagisa for Kaede's sake.

Seven years after graduation, Rio was seen on England chattering with some college student and laughing together on a bridge near Big Ben Parliament.

Marksmanship: Rio is ranked 3rd for marksmanship, girls' side, jointly with Kirara Hazama. English: Rio has a mastery over this subject and apparently the language itself and she's ranked 1st in the school for it.

Intelligence: Rio, despite her whimsical personality, is actually one of the smartest people in Class E, second only to Karma. This stems from her past as a genius elementary school student and though she forgot how to study, she hasn't lost her own wit and guile.

Personality Rio is a friendly, energetic girl and somewhat of a trickster. Synopsis Like the majority of her classmates, Rio debuted in the first chapter; however, she didn't originally get spotlighted until the first Finals Arc where she and Nagisa were the main rivals to Tomoya Seo in English.